CCTV News- Security at the Superbowl

It’s the weekend before Valentine’s day, and for American sports fans, that can only mean one thing- Superbowl Sunday! This year’s clash sees the Carolina Panthers square off against veteran Peyton Manning’s Denver Broncos at San Francisco’s Levi’s stadium for one of the most hotly anticipated matchups in recent years. Whilst American Football’s dedicated British following is still growing, even those with no interest in sports can appreciate the immense spectacle of the occasion- with claimed global TV audiences north of one billion people, and over a million people planning on travelling to the Bay area for game day. And in this day in age, spectacle inevitably requires security. So, with such a monumental task at hand, how do they approach providing security at the superbowl?

Aggrieved Packers fans aside, who would threaten the event? Well -according to Jeh Johnson, Homeland Security Secratary-  nobody specific. “At this time we know of no credible threat directed at Super Bowl 50”, he stated to ABC news on Wednesday, “…we try to anticipate things that can happen from multiple different directions. But we’re always informed by recent events and what we see in the world situation.”. Naturally, it’s understandable for agencies to plan for the worst, and this year’s game arrives at a time of heightened national concern about Terrorism, following the horrific Paris attacks, and the San Bernadino shootings that killed 14 people in the same state late last year. Accordingly, law enforcement aim to address every scale and type of threat.

With this in mind, one of the main challenges facing the event is just how to coordinate the vast plethora of local and federal agencies involved, and making sure important information or threats are shared between them as efficiently as possible. The FBI is the principle agency, with the entirety of the operation being run from their control centre in an undisclosed location near to the game. CNet reports that the agency uses software by a company called Haystax to bring together information from all the active forces on a giant screen in the operations centre. Very Jason Bourne.

As with any large sports arena, Levi’s stadium is already bristling with high definition CCTV cameras. The total count is naturally private, but it’s thought to number over 600. In addition, the venue will be bristling with uniformed and plain-clothes security personnel, constantly on the lookout for suspicious behaviour or threats. The security team certainly aren’t messing around, either- a couple of years ago a photo was released onto social media claiming to show a Sniper’s nest inside Cowboy’s stadium in Dallas. Whilst many were sceptical about their authenticity, the Cowboys’ owner Jerry Jones later confirmed snipers were indeed present at the game, and many have claimed it is fairly standard practice for similar events. Lest us in the UK think it strange, don’t forget that we placed anti aircraft missiles on top of tower blocks ahead of the Olympics… 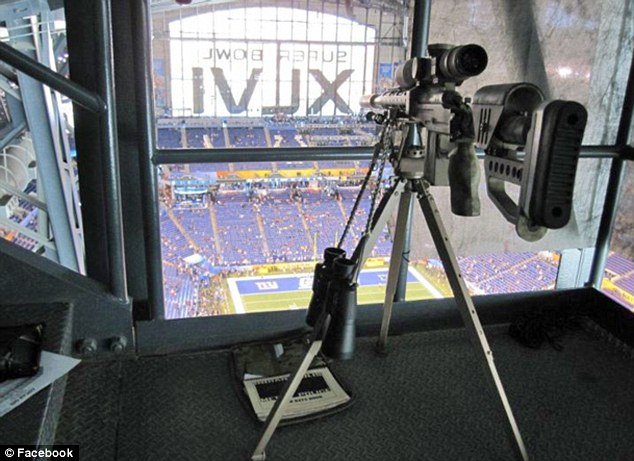 Of course, security at the event won’t begin and end at the stadium gate, either. The FBI will have access to a huge range of cameras and data from all of the surrounding areas as well. Northern California Police forces are thought to have some of the most advanced security networks in the country, with resources including number plate recognition camera systems, facial recognition databases, and even controversial mobile phone tracking devices known as stingers. This will allow them to not only keep track of suspects physically, but also potentially monitor their communications on the fly. Oh, and just in case they’re needed, they have a few F15 fighter jets on standby as well. Better remember that if you plan on taking a drone to town to record some aerial footage of the event- they’re completely banned from the area.