How secure is Glastonbury Festival?

One of the lasting aftershocks of the recent terrorist attack at an Ariande Grande concert in Manchester has been to throw into stark relief the potential vulnerability of crowded events like concerts and festivals. Attacks on such events have historically been rare, however the Manchester bombing does fit into a pattern of terrorists targeting concerts across Europe in recent years, starting with the horrific Bataclan siege in Paris in November 2015. Other incidents have included a suicide bombing at the Ansbach Open Festival in Germany last year, and a “concrete” threat that led to the Rock Am Ring festival being evacuated earlier this month. All of this may lead revellers at this weekend’s Glastonbury Festival to question just how secure the site is. Luckily, the uniquely colourful history of the festival at Worthy Farm has already resulted in it being one of the most secure venues in the country.

The 90s: Jumping the Fence

Glastonbury has long had a reputation as a home for the alternative and radical, with many of the festival-goers throughout the 70s and 80s being travellers and anarchists. This changed somewhat in the 90s when the festival was first broadcast on television. Soon what was once the preserve of dedicated crusties and hippies gained a more mainstream audience, and as a result attendance surged. Unfortunately, only some of this surge was as a result of paying ticket-holders, and jumping the festival fence turned into an annual past-time for some UK music lovers. By 2000, 250,000 people were descending on the festival site, and it was estimated that less than half of these actually had a ticket. With relations between the organisers and the local council fraying, it was obvious the something had to give sooner or later, and the 2001 festival was cancelled, with organiser Michael Eavis citing safety fears and difficulty obtaining a licence for the event.

After a year’s hiatus, the festival was back for 2002, but Mendip Council only granted a licence on the condition that security for the site was significantly beefed up to prevent ticketless fans gaining access. To achieve this, that year Eavis unveiled the now famous “Superfence” – a 3.5m tall steel clad beast designed to stop people both jumping over, and tunneling under, to get into the festival grounds. In the years since these measures have only grown in scale, and now include a secondary inner fence, watch towers and a manned security point every 150m. The space between the two fences is constantly patrolled by police and security staff, and the entire perimeter is covered by an extensive CCTV network. Those that have tried to gain access in recent years have described it as “like a prison break“. 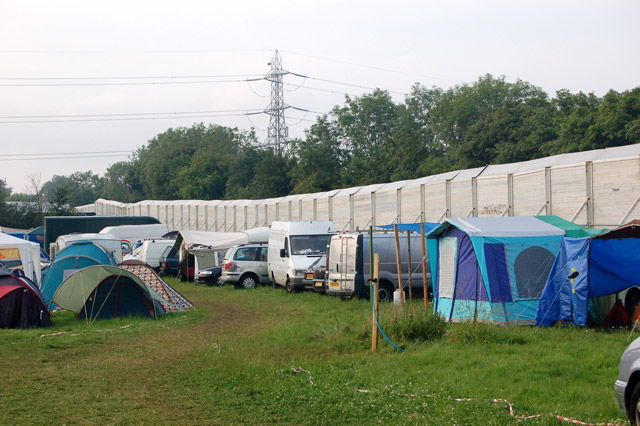 These measures initially did not sit well with some of the regular attendants, who saw it as a draconian imposition on an event that had celebrated anti-capitalist and anti-authoritarian views. Many also voiced concern about increased use of CCTV after another festival – Download – admitted to using facial recognition software to scan the faces of 90,000 fans as they entered the site. Glastonbury have not commented on the specific type of technology they use, but with video analytics currently a standard feature on most IP advanced cameras, it would be a surprise if they didn’t at least have the ability to do this. Despite this, the increase security helped the event secure a sustainable future, and have since become as established a part of the festival as dodgy incense stalls and the Brothers cider van.

This history means that, after the events of the last few months, Glastonbury was already well placed to respond to new security concerns. Festival organisers and police have been at pains to stress that there is no specific threat to the festival, however they have announced a host of new measures to ensure festival-goers can enjoy the weekend without worrying. Police and security will have regular patrols around the area surrounding the site, including the neighbouring village of Pilton. Extra bag searches will be carried out on everyone entering the site, organisers are warning people to pack light and expect slower queueing times at the gate. Visitors have also been asked to not wrap their luggage, and use luggage tags so bags can easily be identified. This year there will also be no entertainment in the festival car park.

According to Eavis, all of this has helped make the festival “the safest place to be in the whole of England at the moment“, with more money spent on security than the Royal Family does. Fans on the site this weekend should be able to enjoy the festival safe in the knowledge that a gargantuan operation is underway behind the scenes to keep them safe.