I am the groundskeeper for a small non-league football team. As we traditionally only have a very small local following, so far we have only installed very basic CCTV on the ground, overlooking a few key areas. The boys have had quite a bit of success this season however, and as a result we’ve seen our crowd sizes increase quite a bit. After a couple of drunken incidents we decided it is time to invest in some improved CCTV for crowd control. The budget is not huge, but we can afford some decent gear- just what do we need to consider when looking to set the system up? Would 700TVL cameras be sufficient? 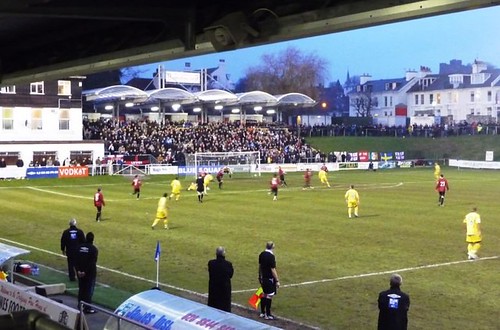 Along with license plates, recording crowds is one of the most demanding things you can require from a CCTV security system. The large number of people involved- combined with the potential need for pulling out stills with a high enough quality to recognise faces- creates a huge demand on any camera’s image quality. But just how can you tell whether your setup is up to the job? Well, handily the Home Office has drawn up standards to help businesses identify CCTV’s suitability. They divide a system’s suitability up into 4 levels:

For each of these levels of monitoring, a different amount of coverage is required, as depicted in this diagram-

Generally speaking, you can see how this means that the closer in your coverage gets, the better chance you have of identifying a subject in the footage. Now this is all well and good, but you can see that it means it is difficult to set up a camera that can watch over a large group of people whilst being able to positively identify them at the same time. There is no way you can completely get around this, but one way to use cameras with much higher resolutions. Please bear with me here, things might get a tad technical…The Home Office also drew up this table, comparing common resolutions of CCTV camera to the size of image required on the screen to acheive this.

So whereas with analogue CCTV you would need a subject to take up 100% of the screen to allow identification, using a 1080p HD IP camera they would only need to take up 38% of the image on the screen. Simply put, high resolution cameras like IP cameras allow you to monitor a much larger area whilst still capturing faces with a high level of detail. This means you can have a smaller number of cameras each recording a wider area, and still pull from the footage stills which can be used for evidence.

This all points to 1080p IP cameras as being by far the best devices to use for this type of security recording. SpyCameraCCTV’s range includes both dome and bullet cameras, as well as models with varifocal lenses, allwoing you to manually adjust the camera’s field of view. Despite this increase in resolution, it is of course still important to make sure you have enough cameras so that there is a bit of overlap between them.